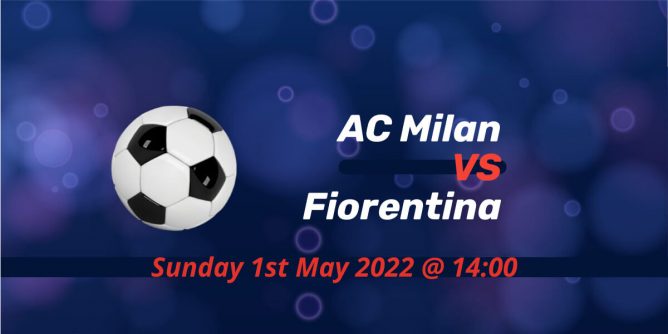 Serie A leaders AC Milan host Fiorentina on Sunday afternoon. There was a big sigh of relief for all Milan fans in the midweek as Inter couldn’t use their game in hand to climb to the top of the table. On the same day, Fiorentina lost 4-0 at home to a resurgent Udinese side.

Inter opened the scoring and created enough chances to secure the win, but they succumbed to a shocking defeat to midtable side Bologna on Wednesday that denied them of returning to the Serie A summit.

Ivan Perisic scored early in the game, but his unnecessarily erratic throw-in resulted in Samir Handanovic’s replacement Ionut Radu to give Bologna the winner after the former Inter man Marko Arnautovic leveled the score.

Although they have the toughest schedule in the remaining four weeks, Milan now have the ball in their court. If they match Inter’s results, they will win their first Scudetto in over a decade.

In another rescheduled fixture, Fiorentina hope to jump to fifth in the table when they host another midtable side Udinese. But their hope was also dashed as the in-form side recorded their first away win over Fiorentina in over two decades.

Although the last two goals scored in injury-time, Udinese had enough chances to kill the game at the earlier stage. The result presents the capital city sides Roma and Lazio with better chances of qualifying for Europa League.

Fiorentina enjoyed a stable season after fighting relegation in the recent campaigns, but it would be a huge blow if they miss out in Europe considering they had a stellar first half of the season with Dusan Vlahovic scoring the goals for fun.

Seven goals in the reverse fixture

Goals are usually guaranteed when these two teams lock horns. Fiorentina won the corresponding fixture this season by 4-3. It was 3-0 to the home side by the hour mark, but Milan responded well with Zlatan Ibrahimovic’s brace in the space of seven minutes. Vlahovic reached double figures in this game with his own brace as Fiorentina snatched the three points in a game that saw five goals in the final 30 minutes.

Alessandro Florenzi and Simon Kjaer aren’t expected to return to action this season.

Milan can decide the race by themselves

Stefano Pioli’s side can no longer look at their shoulders. If they win their remaining four games, they will be champions of Italy. Fiorentina will play to climb back to European places as a league position is their only gateway after a cup exit by Vlahovic’s Juventus.