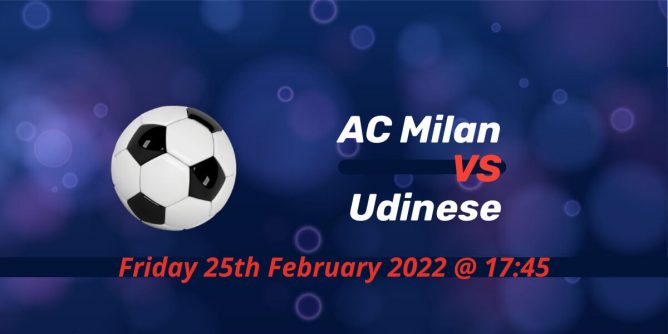 Serie A leaders AC Milan start the weekend’s action with a home game against Udinese. Inter and Napoli failed to take advantage of Milan’s slipup at Salernitana as Stefano Pioli’s side remained top of the league. They’ll once again play the first game of the matchday before the two clubs.

Pioli managed to make Milan competitive again in Italy. After they lead the table for most of the season, Milan showed no real prospect of catching Inter in the final one-third of the campaign.

While the story looked to be repeated this time around, Milan reverted the standings as they now sit top of the table, although Simeone Inzaghi’s side has a game in hand against Bologna.

As Milan is out of European competitions, they have no other distractions for the rest of the season. The injuries and suspensions to key players have been challenging, but the form of youngsters Brahim Diaz and Rafael Leao make Milan believe in a Scudetto after more than a decade.

The match kicks off at 17:45 on Friday 25th February 2022, and the entire match will be available on BT Sport.

In the weekend that wasn’t kind for teams in the top half of the standings, Udinese took a point against European-hopefuls Lazio. The result meant they can keep their three points lead to the bottom three.

Although they have two games in hand, Udinese’s form in 2022 has been not convincing to dream of a comfortable midtable finish, while the relegation-threatened sides improved a lot since the turn of the year.

Gerard Deulofeu scored against a Lazio side that didn’t concede a goal in three games, but they couldn’t secure a back-to-back win. Their victory against Torino at the start of the month remained the only game they won in 2022.

Milan only lost once in the last nine meetings with Udinese, but they failed to collect maximum points in the previous two clashes. In a dramatic ending to the corresponding fixture, Milan secured the point with Zlatan Ibrahimovic’s injury-time equalizer. One of the season’s wonders Beto opened the scoring for Udinese as the hosts lead for more than an hour before the Swede striker’s effort.

Ibrahimovic will not be around this time as he’s nursing an Achilles tendon injury. Simon Kjaer is also out for the rest of the season. Ismael Bennacer is suspended for accumulated yellow cards.

Bram Nuytinck and Antonio Santurro will miss the game from Udinese because of injuries.

Milan want to set the pace

Inter will travel to Genoa on the same day with Milan hoping to put the pressure on them in the title race with the first game of the weekend. Milan only managed to win one of their last three home games.