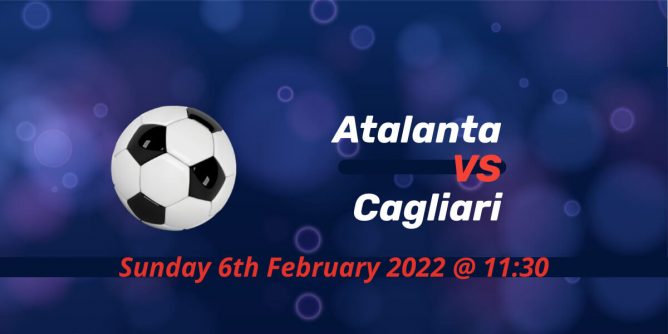 Two teams with a different target in the season clash in the early Sunday Serie A fixture of the weekend. Atalanta, who drew three of the last four league games 0-0, will hope to retain their Champions League qualification spot. For Cagliari, it’s all about survival as they can take the momentum from an improved performance in the first month of 2022.

Three goals each in the first-half and second-half away at Udinese. That was what we can expect from Gian Piero Gasperini’s teams. But that was the odd result from their last four games since the heavy defeat to AS Roma.

Jose Mourinho’s side ended a six-game winning streak of Atalanta with a resounding 4-1 victory. After that, Atalanta only picked one win – the aforementioned 6-2 against Udinese – in their last four games.

Although finishing goalless against Inter and Lazio is far from a disaster, Atalanta needs to find their old way of scoring for fun. Losing the auxiliary attacking outlet Robin Gosens to the league leaders won’t help their case, though.

After conceding 40 goals and only winning a single game in the entire first half of the season, Cagliari started the new year in a form that could see them dreaming of a mid-table finish.

Despite a point in their last two games, Cagliari already won twice as many games in 2022 and they’re yet to concede more than a goal in a game. The wins against Sampdoria and Bologna by the same 2-1 scoreline lifted their spirits ahead of the battle to avoid the drop.

They lost to Sergio Oliveira’s penalty-kick at Stadio Olimpico before two missed penalties in both ends the headline story in the draw against Fiorentina. Joao Pedro, who got the call from Roberto Mancini this week, scored his tenth of the season as Cagliari hope he’ll be their savior in another relegation scrap.

Atalanta collected maximum points in each of their last five games against Cagliari. All the goals scored before the break in a 2-1 victory earlier this season. Duvan Zapata scored the winner after Joao Pedro canceled Mario Pasalic’s opener.

Both of Atalanta’s goal scorers from the November fixture could miss this out. The Colombian is a doubt with muscular problems for Sunday’s fixture. Pasalic, Marten de Roon, Teun Koopemeiners, Hans Hateboer and Luis Muriel are all tested positive for COVID-19. Aleksey Miranchuk is unavailable with a muscle injury while Josip Ilicic is going through a difficult time with depression.

Cagliari will miss Keita Balde, whose Senegal side progressed to the final in AFCON. Star striker Joao Pedro is also missing this one out for accumulated yellow cards. Gabriele Zappa, Alessio Cragno, Damir Ceter and Marko Rog are among the long list of injured players from Cagliari’s squad.

Juventus is only a point behind Atalanta

Atalanta’s seemingly comfortable lead over the sides out of the Champions League spots is now precarious. After their impressive transfers in the final days of the January window, Juventus is now only a point behind Atalanta in fifth place. Cagliari will also feel the pressure as Genoa strengthened themselves.