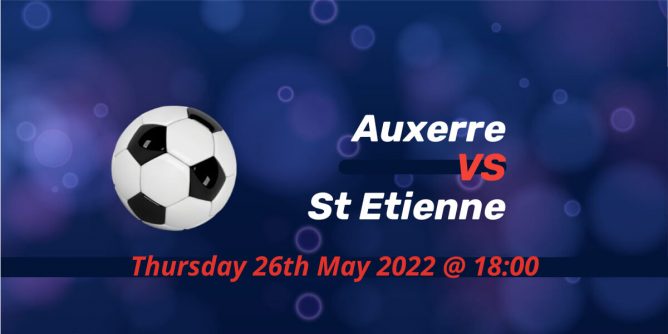 Auxerre host Saint-Etienne in the first-leg of the relegation/promotion playoff in France on Thursday. The Ligue 1 side finally wake up with Romain Hamuma’s late equaliser at Nantes sending them to the playoff. Auxeree beat Sochaux in the earlier game of the playoff last Friday.

Auxerre hope a Ligue 1 return after a decade absence

It was a tough time since Auxerre’s 32 years Ligue 1 stay came to an end in 2011-12 season. Their first relegation from the top division got them stuck in Ligue 2 for a decade with little hopes of promotion for the club known in nurturing talents.

And in came Jean-Marc Furlan. The 64-years-old coach had a torrid time in his short spells at top-tier football with three automatic relegations. But he’s the answer to push Auxerre further to the finishing line of a promotion race.

Last season’s 6th-placed finish was their best since they went back to Ligue 2. And they improved in that with a playoff spot by finishing behind Toulouse and Ajaccio. They reached the final stage of the playoff with a penalty shootout win against Sochaux that send their fans wild in celebration.

Romain Hamouma had a difficult campaign as he was struggling with injuries and rarely get playing time in Saint-Etienne’s below-par season. Yet he had the final say in their closing Ligue 1 fixture.

With Metz losing heavily against PSG and Bordeaux already off the picture with an inferior goal difference, Saint-Etienne needed a goal either in their game or the champions’ sixth at Parc des Princes.

It finally arrived via Hamouma with only his second goal of the season. The veteran striker and the half-time substitute leveled the score from another assist from Saint-Etienne’s best player since the turn of the year, Dennis Bouanga.

Since Auxeree’s relegation ten years ago, the two teams met only once back in 2017. Auxerre won the Coupe de France tie with three goals in the extra-time. Both of the games from Auxeree’s last Ligue 1 season ended in draws. Saint-Etienne is winless in their last nine games against Auxerre.

Furlan has no injury worries or suspension ahead of the first-leg of the final promotion playoff fixture.

Auxerre get the first home advantage

While the second-tier club gets the home advantage in the all-important return fixture in Germany, the rules is different in France. Saint-Etienne will play the final game of the season in front of their fans. Ligue 1 will have 18 teams starting from the 2023-24 season.