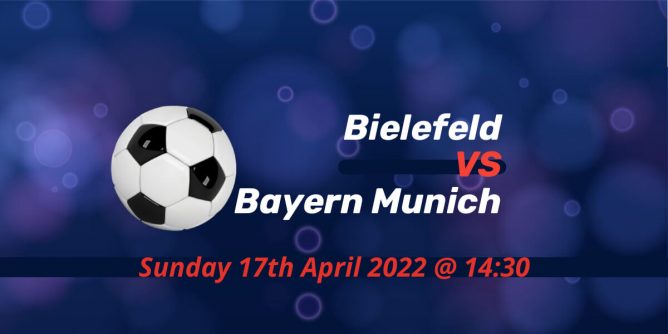 Arminia Bielefeld will have a tough battle in their relegation fight as they host league leaders Bayern Munich on Sunday afternoon. Bielefeld lost more ground in recent weeks as they dragged back to the bottom three of the Bundesliga standings. Bayern, despite bowing out from Europe, extended their lead domestically to nine points.

Bielefeld struggling for goals and points

With only a single goal and point from their last six Bundesliga outings, Bielefeld, who once looked safe from the relegation discussions, is now fast becoming one of the favorites for the automatic relegation places.

Although Hertha Berlin crushed to a heavy derby defeat in front of 74,000 fans in Olympiastadion, Bielefeld is still the team with the worst run in recent weeks out of the teams fighting to not end up with Greuther Furth.

The official news of Patrick Wimmer leaving the club to join VfL Wolfsburg starting from next season could also unsettle the team. The Austrian was pivotal in their excellent start to the new year alongside Masaya Okugawa.

Bayern were humbled by Villareal

As usual, there was no short of self-confidence in Bayern’s camp both when they paired with Villareal and they lost the first-leg in Spain. But that didn’t save them from avoiding a quarterfinal exit for the second consecutive time since the treble season.

Bayern controlled proceedings and created enough chances on the night, but Unai Emery’s side prevailed thanks to a playing style that was completely different from the one they implemented last week.

With DFB Pokal’s second-round exit earlier this season, Julian Nagelsmann’s start is going to be an exactly similar finish to Hansi Flick’s last season at the club. But the tension at the club continues with the uncertainties of star players’ contracts.

Bayern is heading for a new Bundesliga record for most goals scored, but they also had some difficult games on the road that ended with the odd goal. One of them was against Bielefeld earlier this season before Leroy Sane’s late strike. Before Frank Kramer was appointed at some point last season, Bielefeld also took a point from Allianz Arena with a 3-3 scoreline in snowy conditions.

Besides the bad results, Bielefeld were also shocked with two serious head injuries in the last two games. Fabian Klos and Cedric Brunner similarly left the pitch against Stuttgart and Wolfsburg, respectively. Sebastian Vasiliadis is unavailable because of a knee injury.

Niklas Sule, Corentin Tolisso and Bouna Sarr are doubtful from Bayern to make the trip to Bielefeld.

Dortmund isn’t expected to have another chance at opening a title race, but they could dream of that next week in Allianz Arena if Bayern, somehow, lost against Bielefeld. For Kramer’s men, it’s all about avoiding the drop or catching another safety line with a playoff spot.