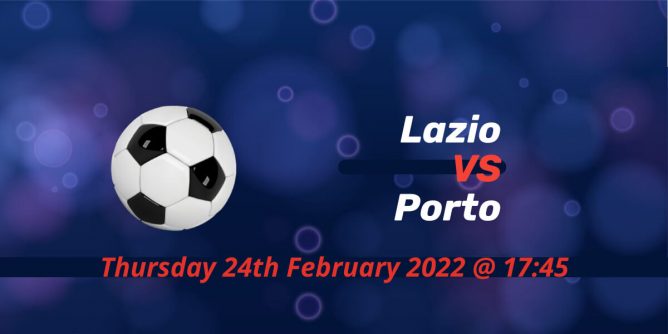 Lazio and Porto will contest the return leg of the Europa League knockout tie on Thursday. Lazio nearly came away with a win from Porto before a brace from Toni Martinez. Both sides stayed where they are in their respective league positions over the weekend.

Lazio is unbeaten in the last five Serie A games

Lazio’s unbeaten run helped them to climb over AS Roma in the fight for European places. There have been three 3-0 victories in their streak of a five-game unbeaten run.

Two of their wins came away from home against Salernitana and Fiorentina. After keeping four straight clean sheets, Lazio conceded an early goal at Udinese courtesy of former Barcelona youngster Gerard Deulofeu.

Felipe Anderson’s header in the stroke of halftime salvaged a draw for Lazio that kept them in fifth place over close suitors Fiorentina and Roma. Atalanta, who seemed a locked option for a top-four last month, is only a point ahead of Lazio.

The match kicks off at 17:45 on Thursday 24th February 2022, and the entire match will be available on BT Sport.

Porto gunning for an unbeaten season

After missing out on the title last season, Porto make up for the lost time with a chance of a historic unbeaten season. Although their 16-game winning streak came to an end against the defending champions Sporting, they maintained their unbeaten run.

Only two teams got a point against Porto this season with Sporting CP able to do it twice. There is currently a six-point difference between the teams in the title race while Benfica had a tough time despite their better run in the Champions League.

Losing Sergio Oliveira and Luiz Diaz to Lazio’s fierce rivals AS Roma and Liverpool could make a difference in their hopes of going far in Europe, however. But Martinez took responsibility last Thursday with his first two goals in the Europa League.

Although Lazio struck first blood in the first leg, Martinez’s two goals before the 50th-minute mark were enough to see Porto take a slender lead ahead of the return leg. It maintained Porto’s unbeaten status against Lazio. A 4-1 aggregate win helped them to reach the 2002-03 UEFA Cup final. Porto went on to win the cup beating Celtic in the final.

Lazio’s goalscorer last week Mattia Zaccagni is unavailable due to accumulated yellow cards. Pedro, Ciro Immobile and Manuel Lazzari are all doubts due to injuries.

Fernando Andrade and Wilson Manafa are the only absentees from the guests.

Lazio would certainly hope to start the game with a determination of turning the tie on its head, but Porto has plenty of confidence from the way they secured a comeback win as well as the respectable Champions League experience in a tricky group involving Liverpool, Atletico Madrid and AC Milan. Meanwhile, Lazio navigated through their Europa League group with no defeat since the first matchday.