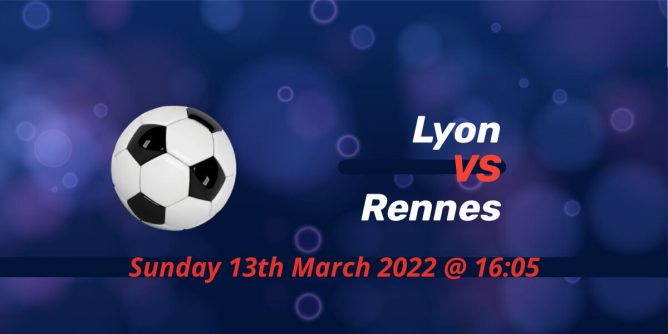 After their contrasting results in European competitions on Thursday, Olympique Lyonnais and Stade Rennais lock horns in one of the best games of the Ligue 1 weekend. Lyon returned home from Porto with a superb win, but Rennes lost their first game of the Conference League knockout stage at Leicester.

Lyon ended Porto’s unbeaten run at home with Lucas Paqueta scoring the game’s only goal at the hour mark. It puts them in the favorite position for a Europa League quarter final spot.

Peter Bosz had a difficult start to his OL campaign, but things look to take shape since the new year. They still need to be more consistent, but the future is bright for Lyon as they look for a return to Champions League.

Their two winter signings Tanguy Ndombele and Romain Faivre had a very good start to life in Lyon. Faivre was sublime in Lyon’s 4-1 success over Lorient as he scored a brace for the very first time in Ligue 1.

Rennes succumbed to defeat at Leicester

After their controversies over their game against Tottenham Hotspur in the group stage, Rennes is back in England for their tie versus Brendan Rodgers’ Leicester City on Thursday night.

They put on a great fight, but the injury-time strike by Kelechi Ihenacho gave Leicester a comfortable 2-0 lead before next week’s return leg. Marc Albrighton opened the gates with a long drive at the half-hour mark for Leicester City.

Rennes picked up pace in recent months for their push for a top-three finish in Ligue 1. They picked up maximum points from their last three games, scoring ten goals in the process.

Rennes could’ve recorded the season’s heavy win, but it was a 4-1 success for them against Lyon in a one-dimensional game. It was an iconic win for Bruno Genesio as he was treated the wrong way by Lyon before his dismissal from the post. There were even many questions over Bosz’s position after the game, but Lyon put their trust in the Dutchman. It’s also a game that started Lovro Majer’s influence in French football.

Rayan Cherki and Sinaly Diomande are out with lengthy injuries.

Kamaldeen Sulemana and Loic Bade are on the sidelines for Rennes with injuries.

OL hope to revenge for their forgettable day in Rennes

It took well over the hour mark for Lyon to create anything of note against Rennes in the first round fixture. On the contrary, Rennes had chance after chance with Majer’s creative silk, Flavin Tait’s energetic performance, Martin Terrier’s versatility and Gaetan Laborde’s positional play were mesmerizing. Lyon expected to up their level from that night and they have the momentum with them after a big win on Thursday.