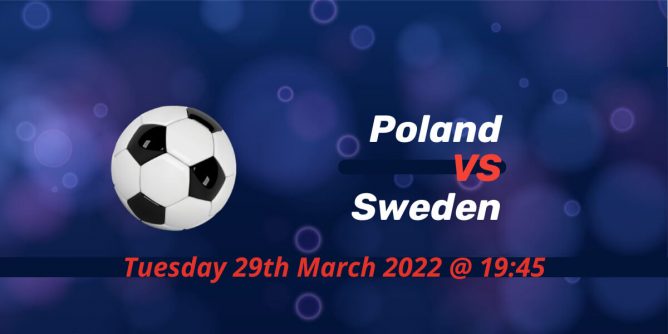 Poland host Sweden in a fiery battle for a place in the World Cup. The hosts were not involved in the preliminary round as they got the bye against sanctioned Russia. Sweden scrapped an extra-time win at home in another hard-fought game versus Patrik Schick-less the Czech Republic.

As Poland didn’t have a competitive game on the weekend, they played Scotland, whose game against Ukraine was postponed, for a friendly fixture. And there was one notable absence in Poland’s camp.

Robert Lewandowski was on the bench for the entire 90 minutes as Czeslaw Michniewicz didn’t want to take the risk for the all-important game when Lewandowski was feeling discomfort.

Bundesliga’s top goal-getter was also a doubt for Bayern’s last game before the international break against Union Berlin. Although he did appear and scored a brace in that match, he’s still struggling with knee pain that made him train individually.

The match kicks off at 19:45 on Tuesday 29th March 2022, and the entire match will be available on Sky Sports

Sweden salvaged a narrow win against the Czech Republic

Both teams weren’t ready to take the initiative with a World Cup qualification on the line in one game, but Sweden finally managed to get the all-important goal that qualified them to the last test at the expense of the Czech Republic.

Robin Quaison, whose move from Mainz 05 to Saudi last summer seemed to reduce his chances of Sweden callup, ended up being the man of the hour. In a game that lacked creativity and spark, his excellent one-two with Alexander Isak produced the winning goal.

Having lost in the World Cup via the playoff against Portugal in 2014, Sweden hope to book their place for the next tournament via a similar route. It’ll be a third successive major tournament appearance for Janne Andersson if they beat Poland on a big stage once again.

Lewa scored twice but was denied by Sweden’s flamboyant play

Although Lewandowski was excellent by himself with two well-taken strikes, Sweden secured a 3-2 win with Emil Forsberg taking center stage in the sides’ meeting in the final group stage game of Euro 2020. Sweden has a perfect record from their last six games against Poland.

Poland’s biggest worry remains to get the all-clear to use Lewandowski from the start. In his absence, in-form Olympique de Marseille striker Arkadiusz Milik started against Scotland. But he was substituted early in the game after picking up an injury as his replacement Krzysztof Piatek secured the draw with a late penalty-kick.

Quaison could return to the starting lineup after his heroics last Thursday. Sweden expected more from Forsberg so that the RB Leipzig attacking midfielder could repeat his scintillating Euros form.

Another hard-fought game for Sweden

Poland could profit from not passing through a tough qualifier four days before their tie against Sweden. Andersson’s side will hope to stay in the rhythm, however, despite playing 120 grueling minutes against the Czech Republic.