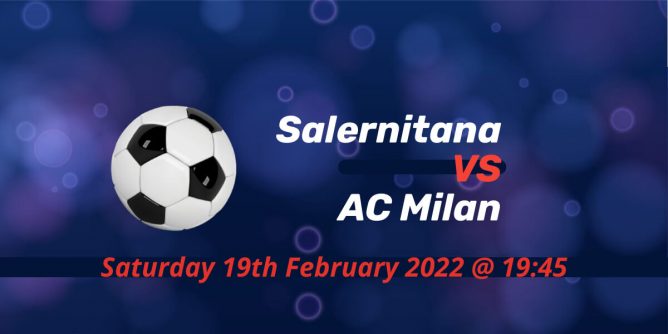 The top and the bottom placed teams in Serie A crossed paths as Salernitana host AC Milan on Saturday. Despite Inter having a game in hand, Milan climbed to the top of the table last weekend with a comprehensive win over Sampdoria. Salernitana avoided defeat in their last two games, but their last victory came in the first game of 2022.

Salernitana was active in the transfer market

Bottom-placed Salernitana signed 12 players in the winter transfer market. Adding to their equally active summer transfer market and the return of two players from a loan deal, they have a huge depth in their squad.

But the quality of the team is far from the expected level in Serie A. They only picked 13 points so far with no signs of survival at any point of the season showing from the side that has the mercurial winger Franck Ribery, who decided to finish the season with the club.

Striker Simy and former Roma defender Federico Fazio are among their signings in the latest transfer window. Simy didn’t stop Crotone’s relegation last term, but he was one of the best strikers in Serie A.

The match kicks off at 19:45 on Saturday 19th February 2022, and the entire match will be available on BT Sport.

Stefano Pioli’s Milan never looked a side that took teams apart at any point. But they’re always an efficient team with the determination level of bringing the good times back at the club.

They looked to lose the title to Inter once again before the magnificent comeback win in the derby. And, after another top-of-the-table clash Inter failed to win against Napoli, Milan now climbed to the top of the league.

However, Inter will face Bologna in a rescheduled game that will be official recently. With Inter losing at home to Liverpool, the same side that beat Milan in San Siro, that could open a door for a fixture date for Serie A officials.

Four wins out of five against Salernitana for Milan

Salernitana’s only win over Milan was recorded back in 1948. The reserve fixture ended with a comfortable 2-0 win for Milan. Both goals were scored in the first 20 minutes of the game. Franck Kessie and Alexis Salemaekers netted the goals for Pioli’s men.

Matteo Ruggeri, Mamadou Coulibaly and Andrea Schiavone are doubts from Salernitana for this weekend’s last Saturday Serie A game.

Zlatan Ibrahimovic isn’t back from his latest injury worries. Simon Kjaer will be out for the rest of the season.

Despite Zlatan’s absence, Rafael Leao and Olivier Giroud are playing their best football in Milan’s shirt in recent weeks. Adding the creative link Brahim Diaz to the equation, Milan has more than at their disposal to cause problems to Salernitana’s weak defense. But it’s basic to remember they lost at home to relegation-threatened Spezia at San Siro last month.