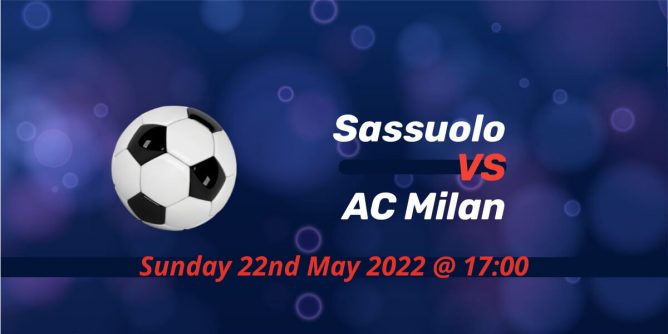 AC Milan can finally end their Scudetto drought at Sassuolo as they only need to secure a draw. Stefano Pioli’s side continues to scrap away results without convincing performances in the past weeks as they’re finally on the finishing line. Sassuolo are out of the race for European competitions.

Under the new coach Alessio Dionisi, Sassuolo had some memorable moments, especially with their sought-after internationals Domenico Berardi, Gianluca Scamacca and Giacomo Raspadori. Sassuolo can still finish the season inside the top half of the table if they record better results than Hellas Verona and Torino.

But, overall, it has been a disappointing season for Sassuolo. Four defeats in a space of five games ended their continental football aspirations last month. Their 6-1 defeat at Napoli was horrifying in particular.

Sassuolo returned to winning ways after more than a month away at Bologna last weekend. Scamacca and Berardi were on the scoresheet as the duo reached 31 goals combined for the season. Raspadori is also reached double digits for Serie A goals, but Sassuolo struggled defensively to balance their team.

AC Milan waiting for the party

Another scrappy game, another Mike Maignan’s masterclass. Milan extended their winning streak with a 2-0 win over Atalanta last weekend to only reach within a point of snatching the Scudetto.

It’ll be the first league title in over a decade for a historic club. Rafael Leao was sensational against Atalanta as he scored the opener before Theo Hernandez traveled half the pitch to secure the points with a memorable goal.

After two consecutive goalless draws against Bologna and Torino, Milan won five matches on a trot. And they all have been typical Pioli performances. Their defensive solidarity played a big role in their season.

Consecutive wins for Sassuolo over Milan

Both of the last two games between the sides were played at San Siro, but Sassuolo picked a maximum of six points. A comeback 3-1 win was recorded by Sassuolo back in November with the usual suspects Scamacca and Berardi among the scorers.

Pedro Obiang, Filippo Romagna and Abdou Harroui are not expected to return to the pitch for Sassuolo. Former Dortmund fullback Jeremy Toljan is absent with a collarbone fracture.

Simon Kjaer, who scored an own-goal in the reverse fixture, continues to support his teammates from the stands.

One last step for Milan

It’ll be a big disaster for Milan if they lose this game and the title at the final hurdle. Although they didn’t play mesmerizing football, Pioli builds a side that binds together with a winning spirit and solid organization. Most of the neutrals are cheering for Milan to finally get back to their heydays.