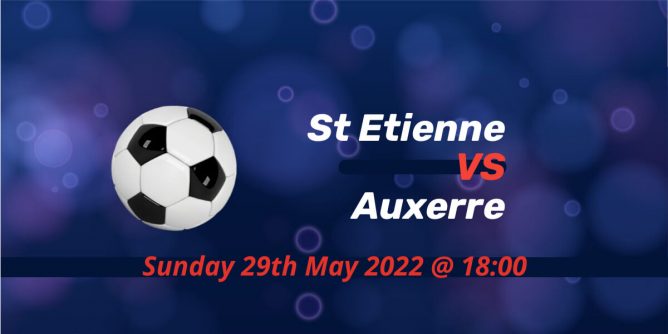 St Etienne and Auxerre will face each other for the second time in the space of three days in the game that decides the 20th Ligue 1 club of next season. Saint-Etienne currently have the edge with the away goals rule, but Auxerre revived their chances with a late equaliser in the first-leg.

An 18 years Ligue 1 stay is in danger as Saint-Etienne face the scare of relegation in the season that saw PSG leveled with them with the most titles after their tenth triumph. Bordeaux already faced relegation for the first time in 30 years.

Saint-Etienne are winless in their last seven games, but a late equaliser in Nantes by Romain Hamuma, who re-signed for the club after initially bid a farewell last summer, gave them a playoff chance. They only finished a point above Metz and Bordeaux.

It was a record low points tally for 18th-placed club in a 20 teams Ligue 1. And there will only be one other season with the French top-flight having 20 clubs as a new proposal is accepted to get off running starting from the 2023-24 season.

Auxerre have been away for a decade

Auxerre’s first Ligue 1 season was when Saint-Etienne last won the competition. But they remained in the division for 32 straight years with their fame mostly owed to nurturing talents that later benefit the biggest French and European clubs as well as the France national team.

When the inevitable relegation came in 2012, they didn’t expect it would be this long for them to even dream of a return to Ligue 1. The new Chinese owner James Zhou played a big role in changing the club’s fortune since his takeover back in 2017.

Jean-Marc Furlan, who is the only coach to get promoted to Ligue 1 on four different occasions, provided their two best finishes of the Ligue 2 seasons. His attacking method is a perfect fit for the squad that have the core players from his time at Brest.

Gaetan Perrin’s equaliser five minute from time meant Auxerre extended their unbeaten record against Saint-Etienne to ten games. Six of those fixtures ended in draws. Zaydou Youssouf, who couldn’t finish the game with a knock in his knee, put the Ligue 1 side in front with an equally stunning strike. Saint-Etienne will have the advantage of the away goals rule, which was used by Nantes in their win over Toulouse last season.

Youssouf and Falaye Sacko both get the all clear to remain in the side after their premature substitutions. But France U19 captain Lucas Gourna-Douath is out of the game as he left the stadium with crutches on Thursday.

Auxerre had all the players that have 10 or more Ligue 2 appearances to their names this season in the first-leg at home. And Furlan also didn’t report any new injuries to the side after Thursday’s draw.

Auxerre will aim to return to Ligue 1 after a decade. And, for the hosts, it’ll be all about prolonging their status for another season. Loic Perrin stressed there would be new updates about the search for the new owners at Saint-Etienne. But it’ll be dependent on the outcome of which division they’ll play their football next season.