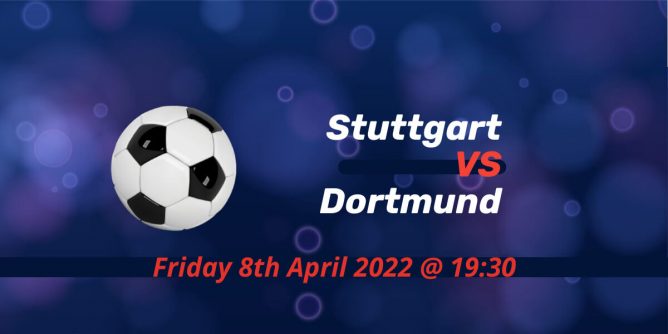 VfB Stuttgart host Borussia Dortmund without their star striker in the first game of the Bundesliga weekend. The Swabians improved their chances of avoiding relegation in recent matches, but they’re still at it with Augsburg further distancing themselves from the drop zone. Dortmund’s title hopes are over for one last time after the home defeat to Leipzig.

Stuttgart coming to life in March

It hasn’t been an easy season for Pellegrino Matarazzo at Stuttgart as they had to spend the majority of the time without regular players for many reasons including injuries and the COVID outbreak.

But they returned to form in time to be out of the red zone with sensational 3-2 wins against Borussia Monchengladbach and FC Augsburg. Although they couldn’t beat Union Berlin and Arminia Bielefeld, they also added two more points to their tally.

But when it all looked fine, they now faced the challenge of facing the next few games without their tall striker Sasa Kalajdzic. The Austrian targetman is out after tested positive for COVID-19.

The match kicks off at 19:30 on Friday 8th April 2022, and the entire match will be available on Sky Sports.

Dortmund welcomed a full house for the first time in two years when they host RB Leipzig in the game of Bundesliga’s matchday last weekend. And it was the first time the current team’s stars Erling Haaland and Jude Bellingham played in front of a packed Signal Iduna Park audience.

But it went off the script following a good start by Marco Rose’s side. Leipzig took a while to assert their dominance, but Konrad Laimer and Christopher Nkunku’s masterclass resulted in a comfortable 4-1 win for Dominico Tedesco’s side.

With Bayern beating Freiburg by the same scoreline the next day, Dortmund is now nine points adrift of the Bavarians with only six games left to play in the Bundesliga season. It’ll be their tenth straight title as no German club comes close to ending Bayern’s dominance.

Stuttgart beat Dortmund 5-1 at Signal Iduna in what was Lucien Favre’s last game at the helm of the Black and Yellows. They also had a good game at the same stadium this season before Marco Reus netted the winner five minutes from time from a fluent counter-attacking move.

Apart from Kalajdzic, central defender Waldemar Anton, who had a great chance to give Stuttgart three points at Bielefeld, is out with accumulated yellow cards. Silas Mvumpa is still nursing a shoulder injury as he’s the standout player out of the five players currently unavailable due to serious injuries.

Although the Dortmund bosses continuously support Rose as they confirmed he’ll still be in the job come next season, Bild reported he could see the door if they lose to Stuttgart on Friday. Nonetheless, they will hope to return to winning ways after the last two rounds ended their title hopes. Six points from the remaining six games could be enough to see Dortmund qualify for Champions League. The situation is very different with Stuttgart as they fight for their league status.