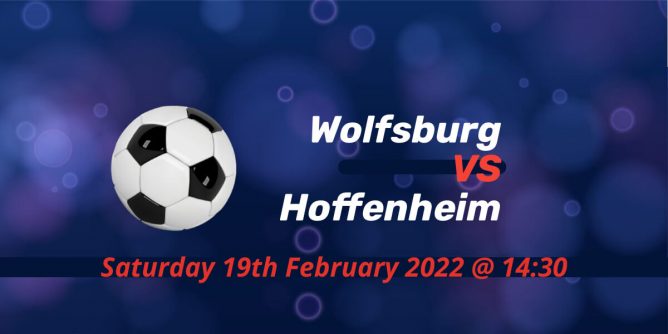 VfL Wolfsburg host TSG Hoffenheim in one of the early Saturday Bundesliga matches of the weekend. Florian Kohfeldt recovered after his tough time at the helm of Wolfsburg with consecutive wins against Greuther Furth and Eintracht Frankfurt. Hoffenheim also ended their four-game losing streak in all competition by beating Arminia Bielefeld, who had the Bundesliga’s longest unbeaten run.

Wolves are back at picking points after a rough patch

11 games – That’s how long Wolfsburg went without a single win in the three competitions they took part in this season. Although they’re out from both domestic and European cup competitions, they now look better suited to secure their Bundesliga status.

A win over bottom-placed Greuther Furth was massive in bringing back the belief in the players after two crises in the first half of the season under two coaches including the former Werder Bremen boss.

And they did even record another crucial three points at their old coach’s team Eintracht Frankfurt. Oliver Glasner’s side struggled to break Wolfsburg’s resistance as Max Kruse scored his first goal since his return before Dodi Lukebakio secured the win in injury-time.

The match kicks off at 14:30 on Saturday 19th February 2022, and the entire match will be available on Sky Sport.

Hoffenheim was inefficient against Bielefeld but got the job done

It could’ve been a huge win, but the 2-0 victory over the team who went six games unbeaten would do a lot of good for Sebastian Hoeness’s side after losing the four matches without playing badly.

Georgino Rutter was once again among the goal scorers as he continued his rise to one of the most promising talents of Bundesliga. With the record goalscorer Andrej Kramaric, much-improved Ihlas Bebou and the creative hub Munas Dabbur, Hoffenheim has many options in the final third.

But the first goal came via their skipper and central defender. Benjamin Hubner only made his third game after an 18-month injury absence so the goal meant a lot for one of the club’s icons.

Under Marc Van Bommel, Wolfsburg started the season with a perfect record from the first four games. It was the first time in the club’s history that happened so few saw he’ll soon be the first coach to be dismissed. But a horrible run starting with a 3-1 defeat at Hoffenheim meant the Dutch coach was replaced with Kohfeldt. Ridle Baku’s stunning goal was only canceled in injury-time before a strong second-half performance salvaged the three points for the hosts.

Long-time absentees Paulo Otavio, Xaver Schlager and William will be missing from Wolfsburg.

Florian Grillitsch will be absent with accumulated yellow cards like his midfield partner Dennis Geiger. Hoffenheim will also be without Ermin Bicakcic, Robert Skov, Chris Richards and Angelo Stiller due to injuries and illness.

Both look to gather pace

These two teams ended their streak recently and they would look to climb up places in the second half of the season. For Hoffenheim, it’ll all be about a return to European football. Wolfsburg, who played Champions League football this season, has to be content with the top half of the standing finish.